To identify and describe a policy issue is a matter that most of the analysts do well. Examining a hypothesis through several qualitative methods is what most of us do. So, let us start by saying that our policy issue concerns the exports of American manufactured products within a geographical scope and a targeted timeframe. In formulating the research, the analyst would identify a set of factors that have affected directly or indirectly manufacturing production in the U.S. from 2009 to 2015. Let us also say that, after a rigorous literature review as well as three rounds of focus groups with stakeholders, our analyst came up with the conclusion that the primary factor affecting negatively U.S. manufacturing exports is China’s currency. Although everyone knows that the issue of U.S. manufacturing is way more complicated than just the variation of China’s currency, let us stop there for sake of our discussion. Thus far, no policy recommendations can be made, unless our analyst wants to embarrass his work team.

Proceed with the identification of metrics:

Once our analyst has found and defined the research problem pertaining the policy issue, he might wish to proceed with the identification of metrics that best represent the problem. That is a measure for manufacturing production variation and a measure of China’s currency variation. Manufacturing can be captured by “Total value of Shipments” statistics from the Census Bureau. China’s currency can be taken from the Federal Reserve Bank in the form of US dollar – Renminbi exchange rate. Again, our analyst may come up with many metrics and measures for capturing what he thinks best represent the problem’s variables. But for now, those two variables are the best possible representation of the problem. Thus far, no policy recommendations can be made, unless our analyst wants to ridicule himself.

Advance with the configuration of the database:

Since data is ready to go, our policy expert may start running data summaries and main statistics. Then, he would continue to run regressions in whatever statistical package he prefers. In our example, he would regress U.S. value of shipment of non-defense capital goods (dependent variable) on U.S.-Renminbi exchange rate (independent variable). Given that our case happens to be a time series, it is worth noting that the series must be stationary. Hence, the measures had to be transformed into stationary metrics by taking the first difference and then the percentage change over the months. In other words, the model is a random walk with a drift. Just in case the reader wants to check, below are the graphs and a brief summary statistics. Thus far, no policy recommendations can be made, but out analyst is getting closer and closer.

Compare results with other researchers’ estimates:

Now that our analyst has estimated all the parameters, he would rush back into the literature review and compare those results with other researchers’ estimates. If everything makes sense within the bounds set by both the lit review and his regressions, our policy professional may start using the model for control and policy purposes. At this point of the research, the analyst is equipped with enough knowledge about the phenomena, and, therefore, he could start making policy recommendations.

Finally, to complete our policy expert’s story, let us assume that China’s government is interested in growing its industries in the sector in a horizon of two years. Then, what could our analyst’s policy recommendation be? Given that our analyst knows the variables and the parameters of the policy issue, he could draft now a strategy aimed at altering those parameters. In my example, I know that a unit change increase in the U.S. Dollar – Renminbi exchange rate could generate a 75% decrease in the monthly change in value of shipments – Non-defense Capital Goods. Despite the low level of statistical significance, let us assume the model works just fine for policy purposes. 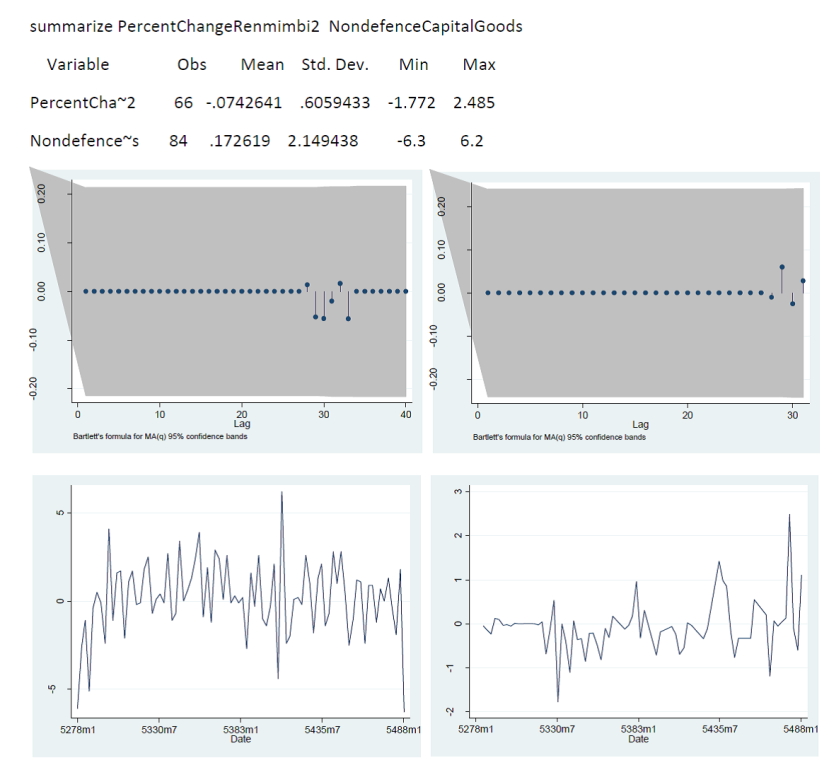 How can I help? Chat here!